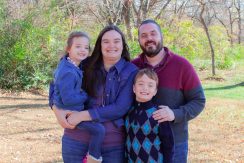 Pastor Jonathan Hall was born into a pastor's family, in 1994. Jonathan and his family moved to Coffeyville, KS. It was in Coffeyville that Jonathan really remembers being taught much of what he knows about the church.

In 2006, after graduating from High School in Coffeyville, KS, Jonathan felt called to go to MidAmerica Nazarene University. There was much question as to what degree he would end up with in the end. However, when it was discovered that he could finish with a BA in Music and marry the love of his life (Jordan Arrowsmith) the decision was much easier!

Jonathan and Jordan both graduated in May 2009 and got married on July 25, 2009! Through a set of circumstances that only God could orchestrate, Jonathan was hired to become a music teacher at a nearby town (Cherryvale, KS).

Jeremiah Daniel Hall was born June 19, 2012! Jonathan spent the next 2 years teaching in the local schools (Coffeyville, KS). He loved every minute of it, but God's calling was still reverberating through his heart and soul to be a full-time minister of the Gospel of Jesus Christ. This desire led Jonathan & Jordan to take a giant leap of faith and move to Excel, AL. It was in Excel that the Lord blessed Jonathan & Jordan one again with a beautiful baby on January 11, 2017 (Julianna Lynn)!

After an opportunity became available at Garnett Church of the Nazarene in Garnett, Kansas, Jonathan accepted the Lead Pastor position. They moved back to Kansas and started leading the church body in January 2018.

Once again, God continued to work through unforeseen circumstances when the Hall family was called to consider coming to Moravia, Iowa to lead The Lighthouse Church of the Nazarene. Throughout his entire ministry, Jonathan desires to use his life to speak on behalf of God and watch how He will continue to change people's lives as they are saved and sanctified through the grace of our Lord and Savior Jesus Christ. He truly enjoys serving in the local church body and prays that the Church will continue to be empowered to be the body of Christ through the power of the infilling of the Holy Spirt.

Jordan Horstick is now serving the Lighthouse Church of the Nazarene as the student ministries director. Jordan will be leading our Lighthouse Kids and Consumed Youth Ministries. Jordan grew up in Richmond, Kansas and attended The Garnett Church of the Nazarene growing up and all through high school. Jordan graduated from Tabor College in 2018 with degrees in Psychology and Youth Ministry. Following graduation, he pursued a master's degree in Ministry, Entrepreneurship, and Innovation while serving as a Graduate Assistant Basketball Coach at Tabor College until graduation in 2020.

God has placed a passion and a fire in Jordan's heart for our children and youth. He is excited to lead and direct them into closer, deeper walks Jesus Christ. 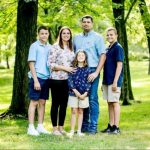 Rachael Helmick is the Music Director at the Lighthouse Church of the Nazarene. She has been leading worship at the church since the fall of 2008. Racheal and her husband, Phil, have three children: Shane, Blake, and Faith. 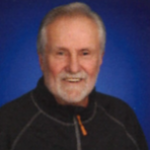 Mark formerly served as staff Congregational Care Pastor at the Brighton Nazarene Church in Brighton, Michigan, where he and wife, Holly attended for 33 years. He served in that capacity for 16 years. Mark has two sons, although the oldest is now in his heavenly home. He also has three grandsons and one granddaughter. Mark and Holly moved to Iowa in 2013 and reside in southern Davis County.

Tasha Irving is currently the Office Manager at Lighthouse Church of the Nazarene. She began working in the church office in June 2020.  Tasha and her husband Brandon have two daughters; Alliya and Eastlynn.